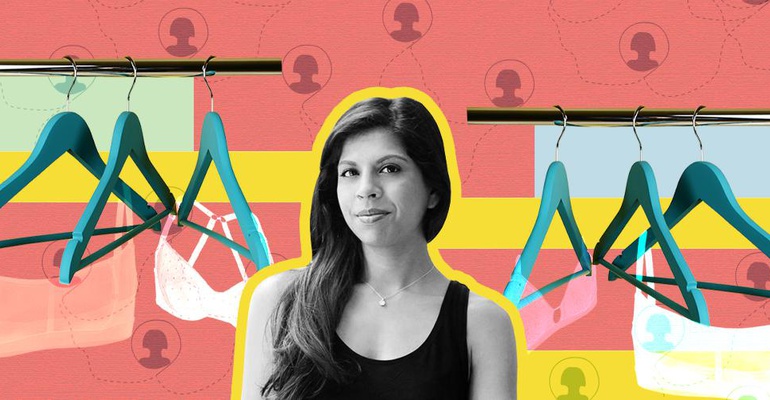 There are proven rules when it comes to building a business from scratch. Step one: Know your product. Second step: develop your product. Third step: Introduce the product to your potential customers. But Michelle Cordeiro Grant took those tried-and-true steps and threw them out the proverbial window when she started her direct-to-consumer bra business Lively.

Instead, she launched her online bra company Lively in 2016 with an idea and an email list — but no physical product at all. These unconventional beginnings paid off, and fast. What Cordeiro Grant hoped Lively would accomplish in the first year, the company did in the first three months. And just three years later, Wacoal bought the upstart bra company for an estimated amount of $105 million.

So how did she get here? First of all, Cordeiro Grant didn’t skimp on the first leg. She knew the lingerie industry like the back of her hand before deciding to start her own business.

Growing up as the daughter of Indian immigrant parents, Cordeiro Grant assumed she would become a doctor or a lawyer. But after earning a BS in finance from the University of Pittsburgh in 2002, she chose to work for retail brands instead. She has amassed retail experience, first as a Product Assistant at Federated Merchandising Group, then as an Associate Product Manager at May Company and Senior Product Manager for Nautica. After working her way up, she lands at Victoria’s Secret. There, in her four years working on the digital side of the retailer as a manager and senior merchant, she witnessed many experiences of women buying bras.

During her tenure there, Victoria’s Secret claimed approximately 40% of the US lingerie market. Cordeiro Grant knew intimately what the dominant player in the market was doing, and she knew she wanted to do something different. Seeing the frustration many women have with their bras – especially with garments designed with style rather than comfort in mind and with the perspective of someone looking at the wearer rather than the wearer mind – she saw a hole in the market. She wanted to give women a different bra shopping experience, so she decided to focus on community and cost before she even knew exactly what bra to sell.

“What I was hearing and seeing was that women just weren’t comfortable,” Cordeiro Grant said in a interview with Nordström, a store the brand partnered with as it transitioned from pure DTC to wholesale. “There had to be another conversation to be had in this $13 billion lingerie industry.”

Cordeiro Grant sought a conversation that focused on comfort and support for women rather than what looked sexy for men. Men’s lingerie is mannequins and corsets (essentially, the vision pushed by Victoria’s Secret). And, as Cordeiro Grant told Nordstrom, Lively isn’t that kind of brand. Overall, the lingerie retail market was valued at $42 billion in 2020 and is expected to hit $78.66 billion by 2027. And when Cordeiro Grant started, she was ripe for the kind of disruption she hoped to bring.

In order to understand what women really wanted, Cordeiro Grant decided what she needed first was a community to serve as her own focused discussion group. Grant started with 250 emails.

Using this small mailing list, Cordeiro Grant came up with a friend referral campaign. Taking inspiration from the success of Harry’s Razors, it gave credit to everyone who provided their email before launch. The difference was that potential Lively customers didn’t know what product they were getting credit for.

The campaign worked. Overnight, she had 133,000 email addresses of women interested in a better-fitting, more comfortable bra.

Understanding the needs of the community, the first product launched by Lively was a bralette that combined the function of a sports bra with the comfort of pajamas. Prior to launch, Cordeiro Grant also decided to set the initial price of each Lively bra sold at $35. She believed that simplicity in pricing was more important than profit margins and would go a long way in creating happy customers.

The community proved invaluable at launch, sending a hand-picked group from their mailing list company launch images and asking them to share them on Instagram. With this, Cordeiro Grant created not just a community, but a guerrilla marketing force for his new venture. The buzz it created worked. Lively shipped the product to all 50 states within 45 days of launch.

Thanks to the Lively community, Grant coined the term “leisure” to describe the brand’s offerings that take athleisure and combine it with the functional aspects of lingerie.

The company grew rapidly and accepted additional venture capital funds to expand from its online roots to physical retail stores. In 2017, Vivid increased by 300%as women increasingly began to demand the inclusiveness and size that brands like Victoria’s Secret failed to provide.

Lively’s success caught the attention of Japanese lingerie giant Wacoal and Cordeiro Grant sold the business in 2019 but remained at its helm.

Even after the sale, Cordeiro Grant continued to take his Lively community seriously, basing new product launches on his feedback. When the Covid-19 pandemic hit, Lively was about to release a new line of swimwear. Cordeiro Grant quickly realized it wasn’t going to be viable at the time and reached out to his Lively community to see what they needed. The answer was loungewear, something Lively had done before. Thus, it increased the production of loungewear and the company saw 10 times growth year-on-year in this category.